The month of February was the 18th consecutive month in which the Ctrack Freight Transport Index showed a decline. Like January, the February year on year decline was marginal, although greater than that of January.

A decline of 1,6% after a 0,7% decline in January does not come as a surprise as global supply chains are still trying to recover. The effects of long harbour delays due to ships arriving in batches at the same harbour is compounded by road borders that are still difficult to cross due to the required Covid-19 testing and inspections, all contributing to a longer journey for goods being transported between countries.

“An 18 month consecutive decline in the Ctrack Freight Transport Index shows that although the COVID-19 hard lockdown is a thing of the past for now, the effects on the economy are still being felt,“ comments Hein Jordt, Managing Director of Ctrack SA. 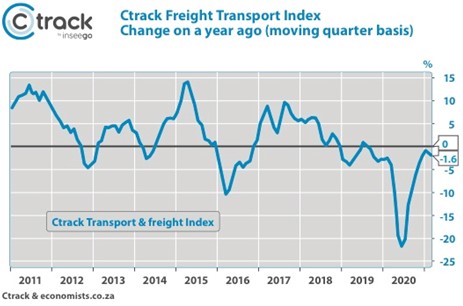 Out of all the sectors measured by the Ctrack Freight Transport Index, rail was the biggest loser, with a 13,2% year on year decline. Alongside this trend there has been a drop in bulk exports via South Africa’s harbours, which creates somewhat of a concern for South Africa’s largest transport conglomerate.

Outside of the Covid-19 lockdown level five and four periods, and their aftermath, a 13,2% yearly decline has never been seen before. On the contrary Road Freight is soaring in the opposite direction.

At the moment Road freight is the clear winner, but this is not a victory to be celebrated, as every country needs their rail network. In many urban areas, rail infrastructure has been impacted by theft and destruction and this is not just a concern for Transnet but for the country as a whole.

The Rail Freight industry is vital for the transport of bulk goods and while some of the decline could be attributed to the decline in exports, the state of the network is definitely a contributing factor. Cable theft has resulted in some trains switching to diesel locomotives, while the replacement of old rolling stock has been halted as fraud cases are still on-going.

Old trains travel at greatly reduced speeds and are more likely to breakdown. Rail track damage in many African countries has resulted in slower train speeds and that may also be part of the decline in South African rail transport tonnage.

The recovery in the Air Freight sector at present is encouraging given that this sector experienced the steepest losses during the COVID-19 lockdowns, losing 50% of its traffic. A 8,5% increase over the last year to February is great to see, but with the global supply chain in disarray, one needs to be cautious of declaring victory in just one month.

Pipelines have shown good growth too.

Back on the road

Road Freight, which is the biggest sector measured by the Ctrack Freight Transport Index has returned a 3,6% year on year increase. While some of this growth could be attributed to a shift from Rail, that was only a small factor as the biggest decline within Rail Freight seems to be in bulk lines.

The Storage sector also declined and contributing factors to this performance could include the delayed impact of increased lockdown levels, but also uncertainty in the retail and business sales markets. It is common to see Storage being the last to increase in uncertain times and low inventories may be the name of the game for some time to come. Timely restocking is expected but this will remain subdued until companies have a clearer picture of what the future holds.

“With the vaccine rollout taking longer to get up to speed than was initially expected and winter months approaching, COVID-19 could be with us for a while still, meaning recovery for all sectors of the Ctrack Freight Transport Index could take longer than what was previously predicted”, concluded Jordt.

Certainty about the future could only be fully obtained when the majority of South Africa’s population is vaccinated.

In conclusion, the declines in the Ctrack Freight Transport Index are to be expected until the COVID-19 situation is a thing of the past, and recovery can commence from the massive declines of 2020.

On behalf of Ctrack South Africa

We have 241 guests and no members online