The Ctrack Freight Transport Index (CFTI) improved by 6,1% year on year. What is interesting is that Air Freight and Road Freight have been the major contributors to this growth. Pipelines showed the biggest improvements, but this remains a minor contributor to the overall index.

While overall improvements in the Ctrack Freight Transport Index are good news, it brings a number of concerns with it. The deteriorating state of our rail network could have numerous effects on the South African economy that were never expected, says Hein Jordt, Managing Director of Ctrack SA.

Graph change in transport sectors on a year ago. 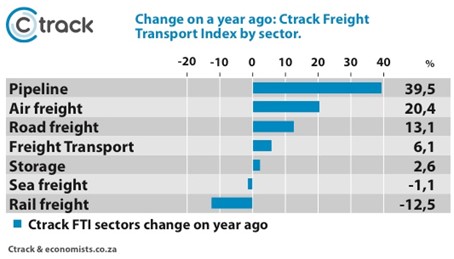 Air Freight is yet to recover and is currently 20% below previous levels globally. In South Africa, Air Freight is down approximately 15% year on year, despite being only 10% below record levels three months ago. The sector, while not yet fully recovered, seems to be flying high, nonetheless.

Compared to the previous three months, storage declined by 14%, with the effect of the July riots still being felt. Due to the ongoing global supply chain disruptions, storage levels may also be lower than previously reported come Christmas.

Graph 2 Changes on a quarter ago for Transport subsectors 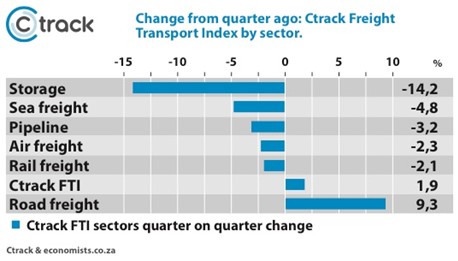 Sea Freight has declined by nearly 5% for the quarter and 1,1% year on year. Major contributors to this decline include a weak South African economy but also the poor performance of the Rail sector in the shifting of bulk goods in particular.

“Despite positive growth in the overall Ctrack Freight Transport Index for the month thanks mostly due to the good performance of Road Freight, indications are that we are set to experience a decline for the third quarter,” says Jordt.

Road Freight continues to beat Rail, but it is not a fair fight.

There is a clear long-term trend forming between Rail and Road Freight. Nearly every second month, Road Freight reaches record levels in terms of volumes while Rail Freight continues to decline to levels last seen a decade ago.

“The Road Freight sector is not able to completely replace the capacity of Rail Freight, and that is having a negative effect on the South African economy,” added Jordt.

Current Rail Freight volumes of 14,8 million metric tons are similar to the levels last seen in August 2010. For Transnet Rail Freight, this means that despite massive investments in infrastructure and locomotives during the last decade, freight volumes have declined approximately 25% since 2014.

In 2013 it was predicted that Rail Freight in the bulk freight corridors would amount to at least 30 million metric tonnes per month by 2020. In 2021 rail was transporting less than half that volume per month.

Meanwhile, Road Freight continues to benefit from the collapse of rail transport with long-distance transport improving. Compared to August 2010, 37% more trucks passed the toll plazas on the main long-distance corridors.

In addition, the tonnage of freight travelling by road increased by 47% over this period indicating efficiency gains with heavier trucks being used. Despite these improvements, the latest research reveals very low margins in the trucking business, which has caused some very large players to withdraw from the market.

Independent operators make up the majority of the trucks on the road, and despite many threats of violence, bribes, ruthless agents and other problems, the driver operator and family businesses dominate. Often the tariff charged is below cost – even when leaving out depreciation. 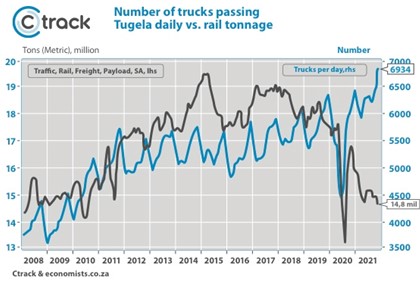 Transnet has reported a loss for the last six months ending September but reports increasing revenue. The next six months is a critical period for Rail Freight or, with luck, the following year.

The destruction of rail is a double whammy for the economy

Theft of cables has resulted in a switch back to diesel locomotives. Diesel locomotives are approximately 25% slower than electric locomotives, which means that the track is not used efficiently, and the productivity levels have declined. The loss of signal cables and equipment further slows down the movement of trains.

In addition, diesel locomotives are more expensive to maintain and require more maintenance. In light of these running costs, Transnet Rail may need to increase prices quicker than the Road Freight Industry.

The ongoing theft of infrastructure has led to stoppages and further delays. In many cases, tracks are cut and need to be replaced.

Transnet has two main profit streams, and both are bulk freight lines, but these lines are impacted by the ongoing theft. Thousands of kilometres of power cables have been stolen, and tracks are often unsafe for trains to pass.

These factors are impacting the ability of Transnet’s biggest customers to survive. It is also impacting current output, as mining companies need the money to remain sustainable. This is all happening despite record-high commodity prices when mines should be building up some reserves and paying off some debt. If Transnet Freight cannot deliver for the next six months, it is likely that other countries will have invested to permanently win over clients. Australia’s mining CapEx reached record highs in 2021, and in 2022 they will probably be the second or third highest CapEx spenders in the mining industry.

That means SA iron ore and coal could lose out, and it will be interesting to see if the coal and iron ore sectors will be able to survive. If these two mining sectors, along with manganese, start to lower production, not only are jobs at risk, but the existence of Transnet could also be under threat.

It is well known that the ports subsidise much of Transnet while bulk goods keep rail afloat financially. If rail collapses, then the ports will not receive bulk goods to export, which will, in turn, reduce the income of ports, hurting the most profitable sector of the state-owned logistics company, Transnet.

Container terminals are also expected to be impacted, as there is simply not enough space for all the trucks. This will be a major blow for the economy, even though the effect will be limited to Transnet and its bulk customers at first. The impact will be felt in job losses and shrinking commodity earnings, which will leave the current account deep in the red.

Traditionally Transnet used 7% of South Africa’s electricity. A non-electric Transnet will import diesel, causing Eskom to lose out. Transnet is also a major buyer of steel and other goods. These industries will feel the impact of a weak Transnet.

Having export sales reduced by half or more will impact the mines themselves. The mining companies in question employ approximately 200 000 people, and many of them could lose their jobs.

Decreased commodity exports will result in a current account deficit, which will negatively affect the rand and, in turn, the prices of goods from petrol to food. Interest rates will be higher, and the economy will slow down even more. This is the second impact, and this impact is broad and will create further poverty in the country.

If that is not enough, Transnet is also experiencing massive fuel theft from its pipelines, which is also having a negative effect on the economy.

The good news is that road has stepped up to the plate. The record levels of Road Freight are proof that the South African economy is dynamic, and other subsectors can take up the slack.

Already a steady stream of trucks travelling to Maputo attest to some mines using road transport within a 300km distance from the coast. Moreover, 80% of container transport takes place via road.

Currently, nearly 7000 trucks a day pass the Tugela Toll Plaza and over 9 200 a day pass the Mooi River Plaza. Trucks crossing into Mozambique have increased by 27% in the last year.

This good news does, however, come with a dark cloud, and that is the loss of the ability to transport bulk goods over long distances in excess of 300 kilometres. The transport of bulk commodities via road is not possible at a reasonable cost which is why it is imperative to assist Transnet in safeguarding its infrastructure.

Scrap dealers should be checked more frequently for stolen goods, as rail cannot be allowed to grind to a halt.

“Simply put, the country and the entire transport sector need rail. Ports need rail to function effectively, and trucks cannot do all that rail does,” concluded Jordt. 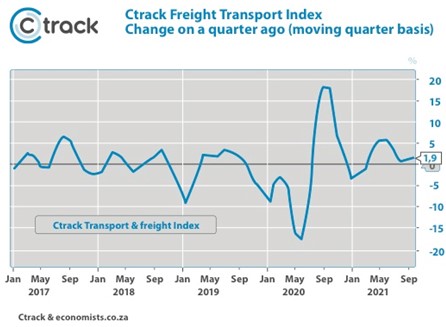 Note: the row highlighted in blue is the main Ctrack Transport and Freight Index values used.

On behalf of Ctrack South Africa

We have 118 guests and no members online