Bad news for the economy mounted in the fourth quarter of 2019, which is evident in the latest Ctrack Freight & Transport Index. The Index shows that only sea freight volumes recorded positive growth during the quarter.

The freight volume decline of -4,5% over the last year is the steepest since May 2016 for the total logistics industry. The Index also shows an overall decline of five months when measuring on a year-ago basis.

The medium-term trend has been negative, too; only one month has experienced positive growth, while another has been neutral in the last year.

Sea freight volumes are positive due to a strong increase in breakbulk and dry bulk transportation. Coal, Iron Ore and Chrome exports are doing well. However, the number of containers landed and shipped are in decline. South African households are feeling the pressure of the weak economy and load shedding.

With both consumer and business confidence negative in the 4th quarter of 2019, most freight transporters are feeling the effects in tonnages and real income declines.

Land transport, which had maintained positive numbers until September for rail freight and October for road freight, has given way to year-on-year declines. In addition, pipeline volumes have declined -5,2% over the last year.

While airfreight volumes are in decline, there is evidence of stronger international freight growth into South Africa. This is due to the demand for consumer technology and may include high-value items such as cellphones and laptops.

The Ctrack Freight & Transport Index has indicated declining freight volumes for four months now on a year ago basis. This is not a long period of decline but is certainly hurting the industry. 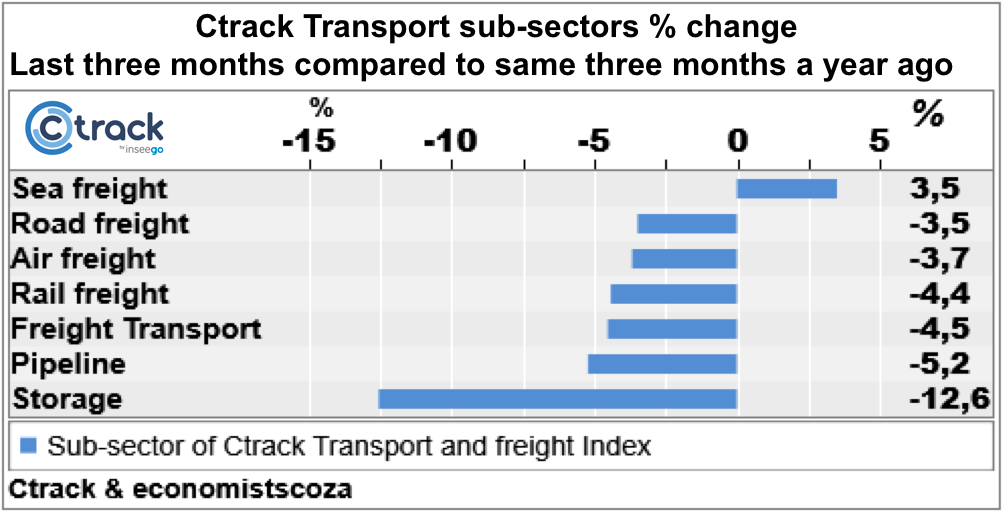 The good news is that December 2019 saw positive changes in five of the six sectors on a seasonally adjusted basis despite load shedding.

However, December is usually the main holiday month leaving one to wonder if it can maintain this strength beyond January. Nonetheless, the short-term trend is somewhat encouraging, particularly in terms of bulk goods volumes transported by rail and through the ports.

Lower outputs were likely recorded in December 2019 from manufacturing and mining. Some retailers have pointed to disappointing sales in December and the rise in inventories is likely due to misjudged sales expectations.

In this weak climate, it is vital that firms control costs with better route planning, security and right-sizing of equipment. More than ever, knowledge in the organisation will make a difference - from the drivers to the supervisors to the managers. Informed is prepared in this environment.

The impact of low confidence will mean those freight transporters who are prepared and informed about the wider climate as well as the micro details of their own firms, will have a better chance of survival. 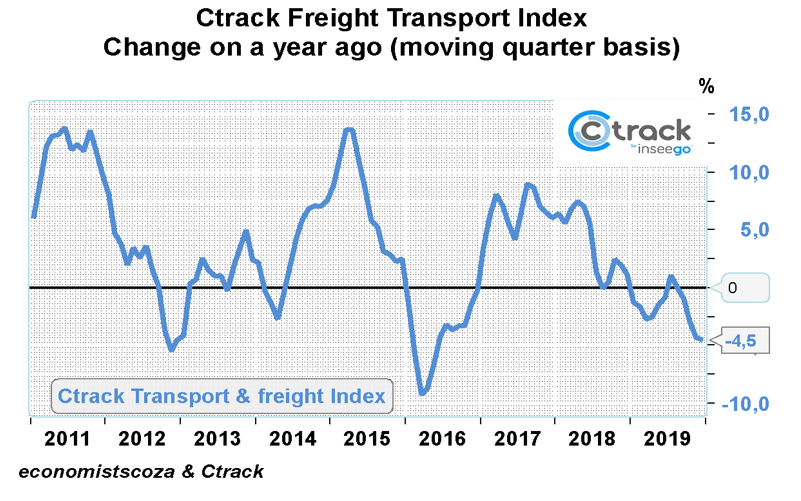 Sea freight volumes show where the economy is in detail

The Ctrack Freight & Transport index is made up of many small indices which allow for detailed discussions about the performance of the various logistics sub-sectors.

Sea freight volumes in the Index are comprised of containers, breakbulk and bulk lines. We include landed and shipped indices for containers but not for breakbulk or vehicles.

The fact that both landed and shipped containers declined over the last year indicates that South Africa’s higher value-added export sector is not able to gain traction beyond passenger cars.

At present, vehicle exports are growing but the number of containers shipped is in decline. As containers are more likely to house higher valued goods, the decline is at least partly due to a slowdown in the manufacturing of foods, clothes, higher-value steel products and the like.

Bulk commodities increased +10,4%, with coal and iron ore leading the way. The main destination for South Africa’s Iron Ore is China, while India takes the lion’s share of our coal.

With the Coronavirus outbreak impacting China, exported iron ore volumes may record a decline. The major bulk imported into South Africa is oil, which had a very small volume increase in the last few months.

Imports of breakbulk were up +14% in the 4th quarter. But, not all of this is necessarily good news, as these imports could be for drought-stricken parts of South Africa and its neighbours.

Export breakbulk volumes are not rising as quickly, but are still increasing. Breakbulk or general cargo is not normally of such high value that it needs a container, but is generally of higher value than bulk commodities.

Broad data shows that some mining can produce more or at least has stocks in reserves to maintain export performance. Consumer imports are struggling, but vehicle exports continue to grow. Older data shows that vehicle import volumes are constrained.

Also Note: All our year-to-year comparisons are based on moving quarters unless otherwise stated. This allows for better trend analysis of the Ctrack Freight & Transport Index.

We have 88 guests and one member online