A welcome recovery for the South African logistics sector in July

The logistics sector of South Africa recovered further during the month of July, following three months of subdued overall activity. This is according to the Ctrack Transport and Freight Index, which closely tracks six sub-sectors of the logistics sector for a true reflection of the industry.

The Ctrack Transport and Freight Index (CTFI) grew by 1.7% in July compared to June, which represented an 8.7% improvement compared to a year ago, notably up from June’s revised 4.9% year on year growth rate. The July index is therefore just marginally below March’s pre-flooding level. The annual comparison is, however, influenced by a low base of comparison, as the July 2021 CTFI reflected pressures caused by riots in KZN and Gauteng as well as the COVID-19 restrictions that were still in place at the time. Many challenges remain for the sector and the economy in general, including high fuel prices, rising interest rates and the negative impact of regular load shedding. However, vastly different trends are evident when zooming into the different sub-sectors of the industry. Four of the six components that make up the Ctrack Transport and Freight Index increased on an annual basis during July, with the star performer once again being Pipeline transport, followed by Road and Air Freight. Sea Freight activity also recovered further in July and moved into positive territory, with annual growth of 0.6% year on year compared to -10.6% in June.

The remaining two components declined, with the biggest contractions evident in Storage and Handling and Rail Freight. Rail Freight has been declining for four consecutive months, reflecting on going challenges in the sector.

“While there are a number of external factors that continue to put the logistics industry under pressure it seems like we have reached some kind of new normal and it is heartening to see that the majority of sub-sectors measured by the Ctrack Transport and Freight Index are recording good growth,” said Hein Jordt, Chief Executive Officer of Ctrack Africa. 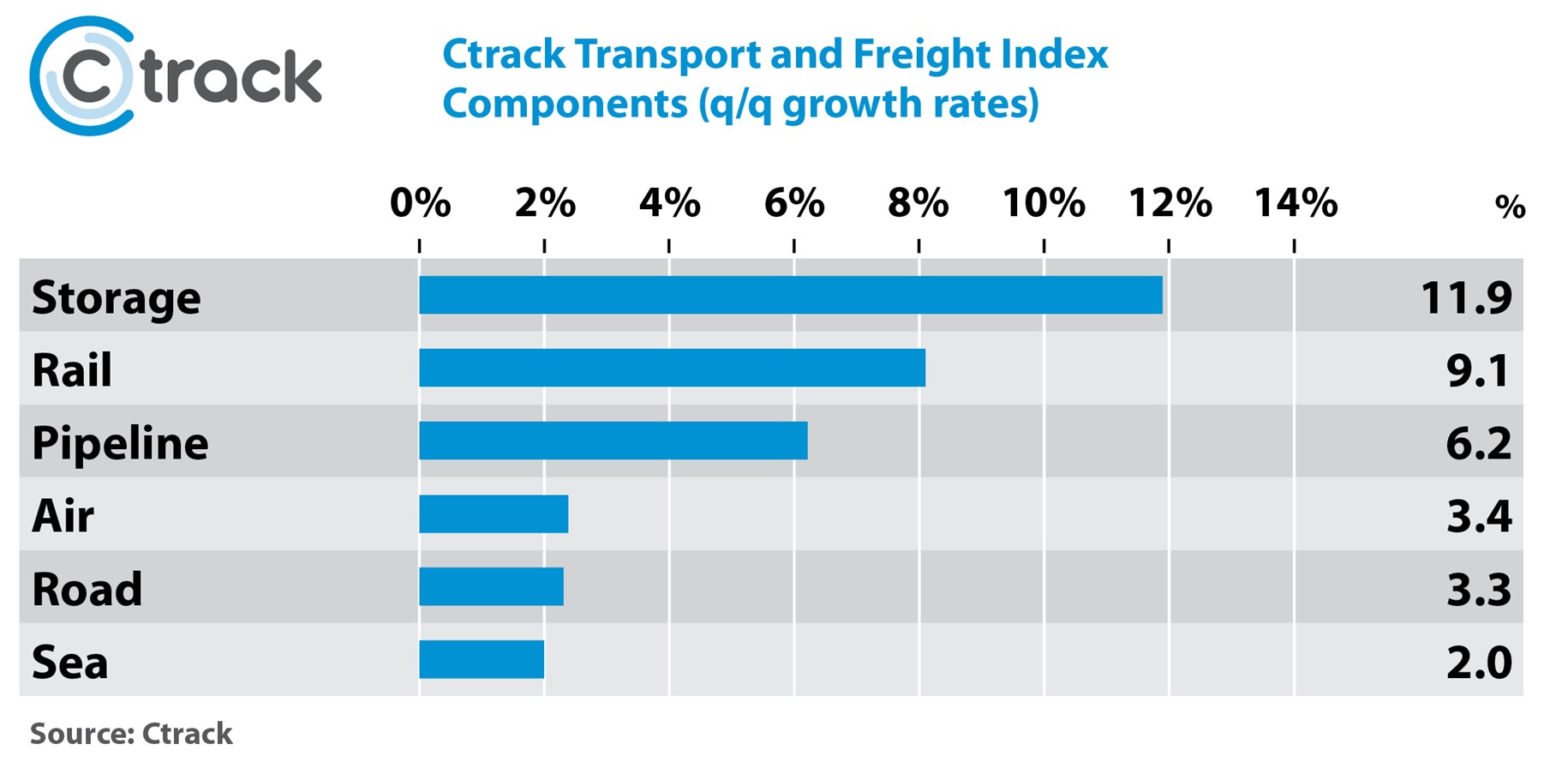 The airline industry and Air Freight were proportionally harder hit than other sub-sectors of the logistics industry during the COVID-19 pandemic. In the midst of hard lockdown around the second quarter of 2020, economic activity plummeted, and movement of passengers and freight was restricted to the bare necessities. While the sector has recovered to pre-COVID levels, it generally underperformed compared to the overall logistics sector in the post-COVID time period.

The Air Freight component of the Ctrack Transport and Freight Index increased by 12.2% in July, compared to a year ago, but dropped by 4.1% compared to June, signalling that some pressure is building. The aviation industry suffers from a severe lack of capacity after the demise of Comair, which at the time of its collapse in June had a market share of about 40%. Including kulula.com and BA-franchised aircraft, Comair’s total fleet size at the time of termination was 26 aircraft. Airline ticket prices have already increased substantially in the last few months and could increase further due to higher fuel costs and increased demand for seats during the festive season. This could impact negatively on both the hospitality industry’s long-awaited post-COVID recovery and the wider economy. 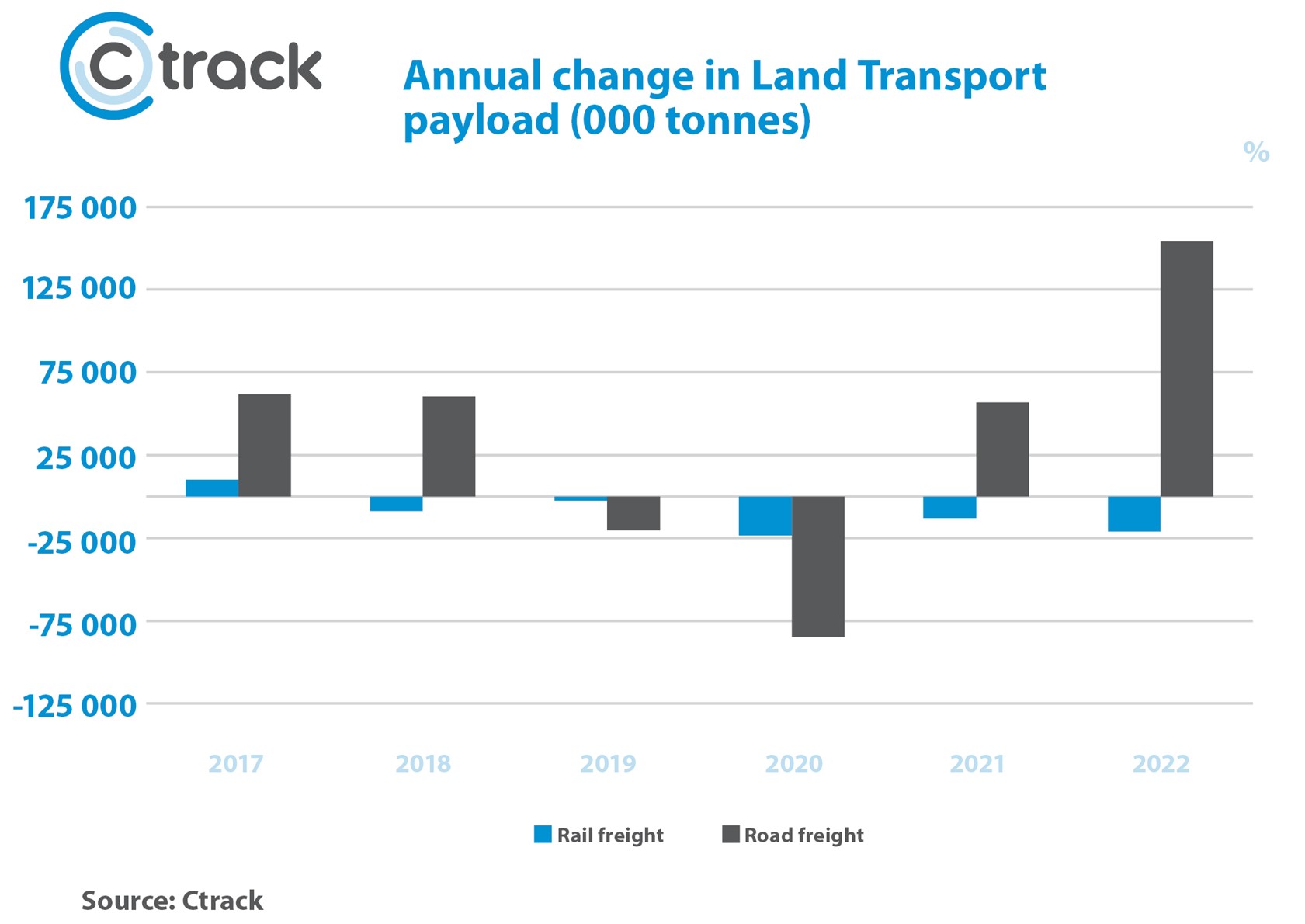 A theme that plays out continuously in the transport sector remains the divergence in trend between Road Freight and Rail Freight. In recent years Road Freight has clearly taken up the space created by the continuous underperformance of the rail industry caused by large-scale theft of copper cables, insufficient maintenance, lack of locomotives and corruption amongst other factors, a narrative likely to persist for some years to come.

Road Freight grew strongly in July by a notable 25.3% on a year ago basis. This is evident by the number of heavy trucks on both the N3 and N4 toll routes that have increased considerably compared to a year ago, while the Road Freight payload for the country as a whole shows continuous growth. Conversely the Rail Freight component of the Ctrack Transport and Freight Index declined by 11.0% year on year, which represents the fourth consecutive month of decline.

Graph 4: Rail vs. Road Freight sub-indices of the Ctrack Transport and Freight Index 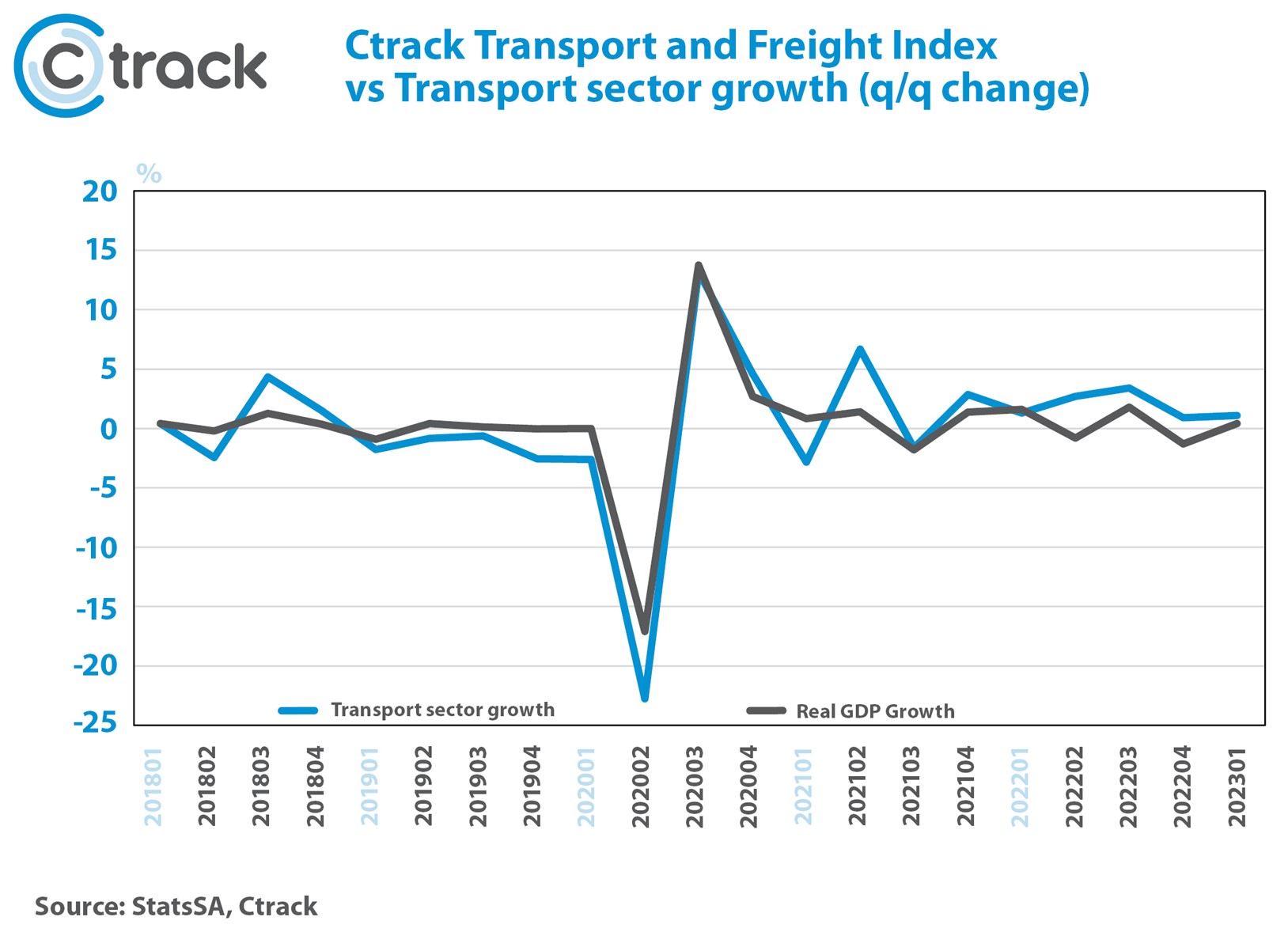 The transport of liquid fuels via Transnet Pipelines (TPL) increased substantially in the past three months, with the pipeline component of the CTFI up by 26.3% in July 2022 compared to a year earlier. South Africa’s own production of fuel has been on a downward trend recently with four refineries closing down. South Africa once relied on imports for hardly a third of its refined fuel, but the situation has changed and bigger volumes of final products now need to be imported and transported via pipelines to the Gauteng market.

The Sea Freight sub sector of the CTFI increased by 0.6% in July compared to a year ago, an improvement on the contraction of 10.6% in June. The growth was driven by a recovery in container handling in recent months, at various ports, while other cargo handling (break & break-bulk) also increased during July.

The Storage and Handling sector remained under pressure in July, declining by 22.8% on an annual basis, reflecting lower inventory levels in the economy and a large decline in the value of transhipments.

While first quarter of 2022’s real GDP growth was stronger than expected, the economy lost momentum in the second quarter due to the impact of the KZN flooding, regular load shedding, higher inflation and rising interest rates.

The June 2022 CTFI, reflecting activity in the transport and freight sector in the second quarter (114.3 index level), declined compared to the March index level (166.8), confirming expectations of a possible quarter on quarter contraction in economic growth during quarter two. Fortunately the higher level of the July Ctrack Transport and Freight Index, at 116.3 (index level), signals a stronger start to the third quarter of 2022.

“It is great to see that the Ctrack Transport and Freight Index is hinting at sustained recovery for the rest of the year and this is a good indicator that South Africa’s GDP will do the same thing in the second half of 2022,”concluded Jordt.

Table 1: Change in Ctrack Transport and Freight Index in July 2022

We have 345 guests and no members online